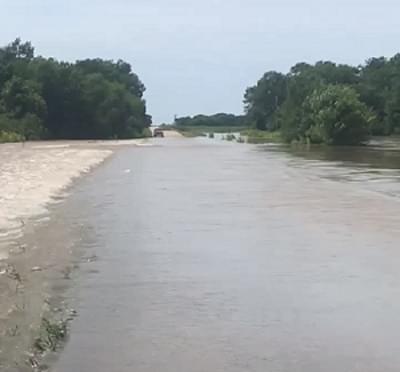 Flooded section of Boat Dock Road in Patoka where Patoka Firemen had to rescue a woman whose car became stranded in an estimated 3.5-feet of water.

Patoka Firemen were called upon to rescue two people from different vehicles who had gotten stranded in floodwaters. No injuries were reported in either incident.

Fire Chief Blake Hyde says an elderly woman was rescued after her vehicle was submerged in water on the Boat Dock Road near Bond Street. A fireman wearing a life jacket and attached to other firemen on dry ground with a rope was able to make his way to the woman’s vehicle. Once there, he was able to walk the woman out of the high water. Hyde estimated her car was in about three and a half feet of water. The woman was first reported in the water at 12:55 on Monday afternoon.

Later in the afternoon, firemen were called to a nearby section of Murray Road south of Boat Dock Road where a man had his vehicle pulled off the road into a ditch. A Patoka fireman using a boat was able to reach the man and take him back o land. That vehicle was also reported to be in about three and a half feet of water.

The Marion County Sheriff’s Department received a third report of a car that had become disabled in the water on the Marshall Creek Road south of Berry Road in rural Patoka. The driver was able to get out on his own.

Area authorities encourage everyone not to drive into water as it takes only a small amount to disable a car or wash it off the road. A large number of deaths are reported each year from vehicles washed off the road during flooding conditions.