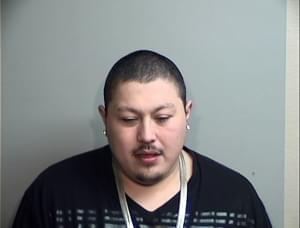 A 33-year-old Centralia man faces a mandatory 6 to 30-year prison term after being found guilty by a Marion County Jury on Thursday afternoon of a Class X charge of aggravated battery with a firearm in connection with a New Year’s Day shooting in the backyard of his home.

Brown was found guilty of shooting Justin McMath in the upper back and shoulder area resulting in a lung collapse and piercing one of his ribs.   McMath was initially taken to SSM Health St. Mary’s Hospital and transferred to a St. Louis hospital for treatment.   Due to complications, McMath said he has had to undergo several surgeries and is still having health issues as a result.

Judge Marc Kelley revoked Brown’s $350,000 bond after the jury returned their verdict after just one hour of deliberation.   The four-day trial had started on Monday.

Assistant State’s Attorney Melissa Doran who handled the prosecution says she will consult with McMath’s family before making a decision on what sentence to ask for at the October 23rd sentencing hearing.

McMath took the stand for the prosecution and told the jury he had gone to Brown’s home to retrieve a phone he had left behind earlier.  He reported a struggle occurred as he attempted to enter the home and a shotgun Brown had in his possession discharged and struck McMath.

Other testimony included video from a neighbor’s surveillance camera that showed Brown leaving his home with the gun.    He was gone for 24 hours before returning home without the gun.   Doran indicated the gun has never been located.

Meanwhile, McMath said he called 911 himself to get help for his injuries.

Brown did not testify, but his attorney claimed her client was acting in self-defense and left the home with the gun after the shooting to keep it out of McMath’s hands.   A number of motion hearings were held during the trial when Brown’s attorney attempted to enter evidence that had not been provided to the prosecution before the trial.