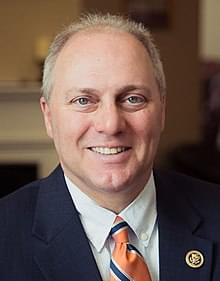 SPRINGFIELD, Ill. (AP) — The No. 2 Republican in the U.S. House brought a hopeful message to the beleaguered Illinois GOP Thursday.

Rep. Steve Scalise of Louisiana, the House minority whip, told the faithful at the Illinois State Fair’s Republican Day that grassroots organizing and better ideas flipped his home state from Democratic control when he began his political career to Republican domination of the legislature and statewide offices today.

“The ghost of Huey Long still walks the state Capitol in Baton Rouge,” said Scalise, referring to the legendary Depression-era Democratic governor and U.S. senator. “But we finally took it back … and in just a short period of time, you can do that, too.”

Scalise, 53, who walked to the podium with a crutch in his left arm, was gravely wounded in June 2017 when a gunman from Illinois, allegedly distraught over Republican Donald Trump’s election as president, opened fire on a congressional baseball practice in Alexandria, Virginia.

“He is our story of redemption. He’s our story of recovery,” Davis, who was on the field during the incident, said of Scalise. “And he’s the story of what Illinois Republicans are going to be after the next election.”

Scalise urged the crowd, which waved signs reading “Fight the Machine” and “Reject Socialism,” to defend Trump’s immigration policy of securing borders, hailed the economy’s growth and continued the GOP plea for a health care program in which people can shop for the best deal.

Republicans are hoping for help from Democrats themselves because of Illinois’ reputation for political corruption. The latest example is Democratic Sen. Tom Cullerton of Villa Park, who faces a federal indictment that he embezzled $275,000 in pay from a union for which he allegedly did little work.

The GOP is also pouncing on Pritzker’s “fair tax” plan. Voters will decide in November 2020 whether to amend the constitution to allow for a graduated income tax that takes a greater percentage of income from the wealthy.

“There is nothing fair about it,” Greg Baise, a longtime business leader, said in a statement which identified him as chairman of a group called Vote No on Blank Check Amendment Committee. “Approval means handing Springfield politicians a blank check to raise taxes on Illinois families.”