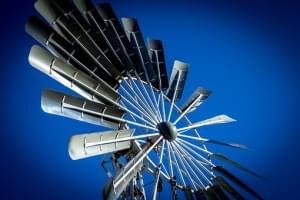 VALMEYER, Ill. (AP) — A southern Illinois county repealed an ordinance that would enable the construction of wind farms, stalling a proposal to build 50 turbines along the Mississippi River.

The Monroe County Board of Commissioners voted to suspend the Wind Energy Conversion Ordinance after residents voiced safety concerns about the long-planned Southern Illinois Wind project. They will take into account safety concerns expressed by local residents and members of the Monroe County Fair Wind Coalition, a citizens group that made a presentation at a Planning Commission meeting in April.

The board will not accept applications for special use permits for about 18 months while commissioners revise the ordinance, board Chairman Robert Elmore said.

The developer of the wind farm, Joe Koppeis , spent a decade planning the $220 million farm on the bluffs between Valmeyer and Fults about 30 miles south of St. Louis. But he didn’t apply for a special use permit. Last year, he explained his concept at a County Board meeting with a standing-room-only crowd. He wasn’t available for comment this past week, the Belleville News-Democrat reported.

Elmore said he believes communities need to find alternatives to the limited supply of fossil fuels to produce energy, and he would like to see more homes and businesses install small solar or geothermal systems, but he doesn’t like the idea of giant solar or wind farms dominating the rural landscape.

The wind farm would consist of up to 50 turbines on a 15-mile stretch of leased farmland along the bluffs. Koppeis has said it would generate clean, renewable energy, create construction jobs.

“In addition to that, Valmeyer School District needs tax revenue,” Koppeis told the newspaper in December. “They’ve always struggled, and the wind turbines would pay real-estate taxes in the amount of about $40,000 a year per turbine.”