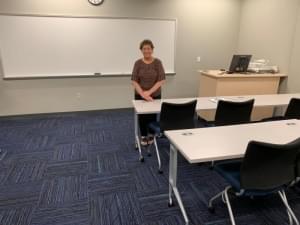 Kaskaskia College Salem Education Center Director Janice Eischens showing off the new flooring just completed at the center earlier this month that was damaged when the center flooded during the heavy rains Wednesday night.  Photo by Bruce Kropp.

The Kaskaskia College Salem Education Center is expected to remain closed next week as cleanup continues from a flood that occurred during the more than 3 and a half-inch rainfall on Wednesday night.

College President George Evans says the staff of the center arrived Thursday morning to find 3 and a half inches of water through about 70 percent of the building.   He reports Serve Pro was called in immediately to begin the cleanup.   Evans says while the electronics in the center appear to have escaped damage, the water did get into some of the drywall which will have to be torn out.

Evans says no dollar estimate is yet available on damages.  The college had just completed a moisture mitigation program and replaced all the flooring and carpeting in the center over the summer at a cost of more than $100,000.

Evans reports the two classes scheduled at the Salem Education Center on Thursday and Friday were rescheduled and plans are being made to relocate classes in the coming week.   The President reports some students may be transported by bus to another location and some classes will be switched to on-line for next week only.

At least two other businesses on the west end of the Westgate Shopping Center also had significant water damage.