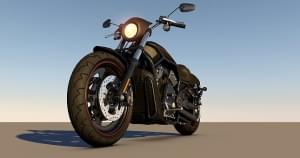 A 44-year-old Salem man has died in a Saturday morning motorcycle crash on the Selmaville Road near the Nation Road southwest of Salem.

The driver of the cycle, Christopher Campbell, was pronounced dead on the scene by Marion County Coroner Troy Cannon shortly after the crash occurred.

A passenger, 40-year-old Amanda Charlton of Salem, was ejected from the cycle and airlifted from nearby Selmaville School to Barnes Hospital in St. Louis.

State Police say preliminary details indicate Campbell was traveling southbound on Selmaville Road when he failed to reduce speed on a curve and drove off the roadway.  The cycle struck a sign before coming to rest.

The Salem Fire Protection District was called out to help set up the landing zone for the helicopter at Selmaville Grade School.  United Medical Response transported Charlton to the medical copter.  The Marion County Sheriff’s Department and Marion County ESDA also provided assistance at the scene.

The crash occurred at 9:54 on Saturday morning.

The Rogers-Atkins Funeral Home in Salem is assisting the Campbell family with arrangements.