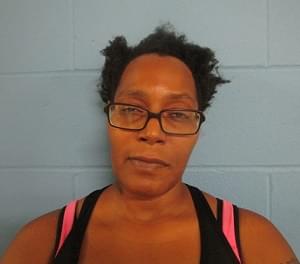 Central City Police say a 40-year-old Sandoval woman allegedly maced two people and struck one of them after allegedly gaining entry to a closed business by saying someone was trying to kill her.

Jackie Davis of East Wyoming was later taken into custody for aggravated battery after she had left the scene in a vehicle.

Central City Police say Davis was allowed inside Monical’s Pizza after banging on the door claiming she had been drugged and someone was trying to kill her.  Once inside, she is accused of walking through the business and getting into an altercation with an employee that she allegedly struck and maced.

Davis reportedly then went back outside and attempted to gain entry to the employee’s car.   Police say the incident was being videotaped by another man who she also allegedly maced.   He was able to drive off was the can of mace and one of the woman’s shoes in his car.

Police say Davis was holding a child during both incidents before setting the child down and leaving in another vehicle.

An employee of Monical’s picked up and cared for the child until police arrived.

The incident occurred around 10:30 Friday night.