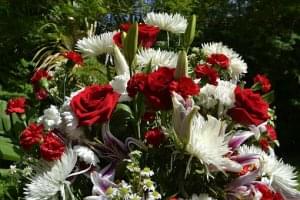 Kendall S. “Ken” Rase, 76, of Ashley, Illinois passed away at 9:09 A.M. September 9, 2019 at Crossroads Community Hospital in Mount Vernon, succuming to pancreatic cancer. Ken resided in Pembina, North Dakota until 1961. He attended NDSU before relocating to Eugene, Oregon where he joined the Hilton Hotels Corporation. After a transfer to Los Angeles, he was presented an opportunity to enter the film production industry which eventually took him on to Colorado and Utah, where he remained until his move to Southern Illinois in 1981. Ken came to Mount Vernon from Salt Lake City, Utah in 1981 and joined the business community as owner of a small print shop which eventually evolved into AZUSA, Inc., a leader on quality offset printing. Along with AZUSA, 1985 brought the era of “The Roasted Corn Guy”. His very active role in the special events food industry is being continued today by a Springfield-based company. He was a past member and president of the Mount Vernon Rotary Club where he was the recipient of the Paul Harris Fellowship award.

A Greeting of Family and Friends will be held from 5:00 to 7:00 P.M. Friday, September 13, 2019 at Newell Funeral Home, 601 South 42nd Street, Mount Vernon, Illinois. A Celebration of Life will begin at 7:00 P.M. Friday evening with Mr. Marty Mills officiating. Memorials, in Ken’s loving memory, may be given to Saint Jude Children’s Research Hospital. Call Newell Funeral Home – Mount Vernon at 618-246-0100 or visit newellfuneralhome.com for further information.

He was born February 17, 1943 in Grafton, North Dakota to the late Donald E. and Marie S. (Severson) Rase. He was first married to Dian Cruson. He later married Judy A. Garrison on November 1, 2006 and she survives in Ashley.