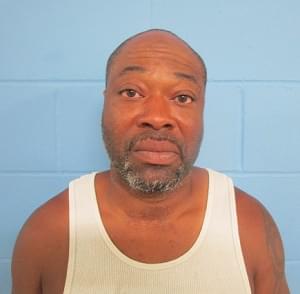 During the court hearing, Christopher James was identified as the step-father of three of the four juveniles who have also been taken into custody in connection with the case.

Led by Assistant State’s Attorney Melissa Doran, Centralia Police Lieutenant Greg Dodson outlined sometimes conflicting statements made to police about the incident from several eyewitnesses and from a video camera at a residence 50 to 75 yards away.

Dodson says some of those providing statements said the victim had been knocked off his bike after being chased down by a group near Lincoln and Haussler. The victim was allegedly being beaten when James intervened. He’s accused of beating the 15-year-old victim with his bike as well as “got his stomps in” on the boy as one witness described it. Based on clothing James was seen wearing a half-hour earlier along with his stature, Dodson believes he can identify James as the person in the distant night time infrared video that was stomping on the victim.

James’ public defender Matt Wilzbach asked Dodson on cross-examination if this was part of an on-going feud between the Rude Boys gang and the Morning family. Dodson confirmed that the victim of the beating was an alleged member of the Rude Boys gang that is believed by police to be responsible for earlier firing shots into the Morning home where James and three step-sons charged with the beating resided.

Dodson also told the court their last contact with the St. Louis Hospital where the victim was being treated indicated he had a level two permanent brain injury and it had not yet been determined what extent of recovery can be expected. A grandmother told police her grandson was unable to speak or have any memory of the incident, something that was confirmed by medical staff.

After finding probable cause, James waived formal arraignment and a jury trial was set for November 12th. The next pretrial hearing will be on October 9th.