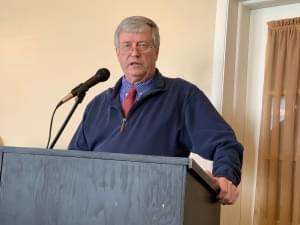 The Salem City Council Monday night will hold a hearing on their budget for the fiscal year beginning May 1st and swear in Mayor Rex Barbee for his second term.

There will be a presentation about the budget as well as an opportunity for public input at a public hearing at 5:45 Monday evening before the regular 6 pm council meeting. City Manager Bill Gruen is expecting the general fund to end $76,116 in the red after a transfer from the General Fund to the Police Pension Fund.  However, the overall budget will be in the black.

When the regular meeting begins, Barbee will be sworn in to begin his second term. The oath is being given at this meeting so Barbee can swear in the three members elected to the city council at the May 6th meeting.

Gruen is recommending an amendment to the current year budget be made to the General Fund to complete renovation costs of the facade and lobby at city hall without financing. The $120,000 cost will be available from a positive general fund balance. Gruen is also asking the council to consider a $42,000 addition to this year’s budget for an update to the police department’s computer system.

Later in the meeting, the council will be asked to enter into an agreement with 20/20 Technical Advisors for services, equipment, and labor for the project. No bids were sought on the project since 20/20 Technical Advisors is doing other work on the city’s computer system for the Marion County 911 system. A $20,400 addition is proposed to the budget for rebuilding Shelter Number 5 in Bryan Memorial Park.

The council will be asked to concur with the Planning Commission to amend the Comprehensive Plan to include the Inclusive Playground in Bryan Memorial Park. The city is currently assisting the Lion’s Club in making an application for a state OSLAD grant that could pay for up to half the cost of the park.

The Daffy Dill Garden Club is requesting their annual $14,500 grant for beautification work in the city.

The council will consider a request from “Amazing Grace” to sell concessions at the Men’s Softball games to help keep softball fees low and for fundraising for charitable activities.

BnC Bikes is seeking permission to use the Bryan Park Nature Trail for a mountain bike youth event on Saturday, May 4th.