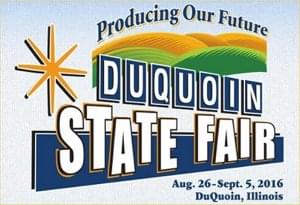 DUQUOIN, Ill. (AP) — Main Street and the loop road around the DuQuoin State Fairgrounds will be resurfaced this summer.

State officials announced Wednesday that minor structural work will also be done on the grandstand. And the Southern Illinois Center will have heating and cooling ductwork upgraded later this year.

The Illinois Department of Transportation is resurfacing the roads for just over $350,000. Agriculture Director John Sullivan calls the work “long overdue.”

Officials say the DuQuoin State Fair has an annual economic impact of $6 million. That includes $2 million for wages and salaries. It generates $500,000 in sales tax revenue.

The DuQuoin State Fair will be Aug. 23 through Sept. 2.

Admission to the fair this year will be free. Parking is $15 on the fairgrounds and $10 near the Southern Illinois Center.