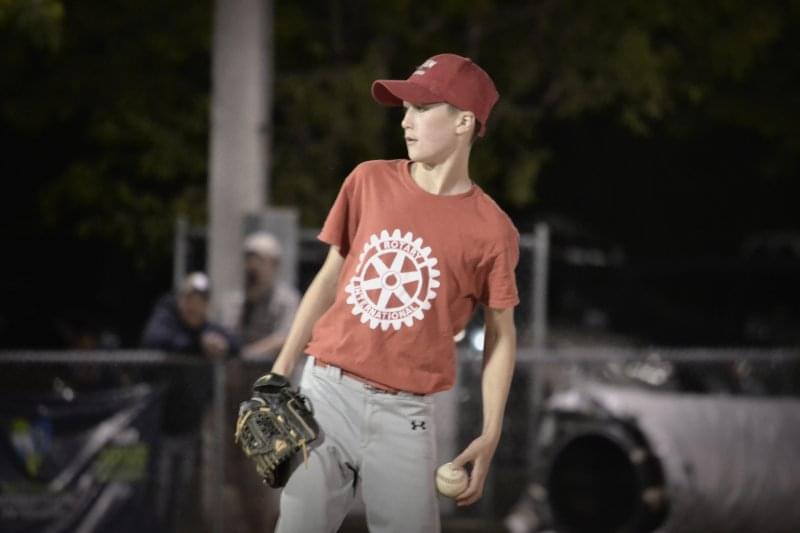 Rotary is one step closer to clinching a spot in the 2019 City Series after a tight 5-4 win over Americana in a pitcher’s dual to the end.  Rotary’s Cooper Lobek came in to pitch in the first inning and worked the rest of the game allowing just 3 hits and 1 earned run while striking out 12 and walking just one.  Rhett Detering was equally as tough for Americana striking out 15 and walking 1 allowing just 4 hits and 2 earned runs.

Rotary broke a 4-4 tie in the top of the sixth inning when Keaton Gullion reached second base on a fielding error in the infield and scored when Deytin Parker struck out and ran to first on a dropped strike.  Lobek got Americana to ground on a a great defensive play by Brayden Rector and Kolsyn Quinn for the 3rd out with the tying run at 3rd base.  For Rotary, Parker drove in 3 runs with a triple, Quinn tripled, Rector added a double and RBI.  Lobek also had a hit and run.  For Americana, Silas Moats had a 2 run single and Wes Hunter added the other RBI.  Ryan Detering had 2 hits and scored twice.

Minor League kept pace with a 13-8 win over Lions.  Ayden Rose doubled twice and tripled while driving in 2 and scoring 4 runs in the win.  Brody Collier also doubled.  Colton Shelton added an RBI with Collier driving in a pair as well.  Colten Starnes had 2 RBI in the loss and Jackson Green drove in 3.  Hudson Gambill also had an RBI and Colton Rogers doubled as he went 3-4, Luke Young had 2 hits and 2 runs.

State Farm scored a run in the fifth to walk off on Elks 6-5.  Kamerin Arnold had the walk-off RBI.  Kyler King was 3-3 with 2 doubles, 2 RBI and 2 runs scored.  Silas Lux added 2 RBI, Max Vincent scored and drove in a run with Eli Dice scoring and Nate Lowery and Cooper Lyons also scoring runs.  Dice struck out 8 and scattered 4 hits in 3.1.  Lowery got the win getting the last 3 outs, striking out the final 2.  In the loss, Evan Barnes drove in 2, Trey Clark and Brennan Beck each added RBI, Jaxon Ward scored along with Riley Tate, Koltyn Tolka and Drake Rector.  Jaxon Ward worked 3.2 innings and struck out 6.

In boys coach pitch, Jeff Dunahee beat Medicine Shoppe 13-6.  In the win, Will Vincent, Ben Lux, Kolten Calhoun and Keaton Johnson each went 3-3 with Vincent and Calhoun scoring 3 runs each.  Johnson finished with 4 RBI, while Grant Squibb and Owen Tennyson each had 2 doubles and 2 RBI.  Jack Turner added 2 hits, Zach Jones had a hit and Kadyn Shaw a hit and run.  For Medicine Shoppe, Emit Gibson and Cameron Slater each had 3 hits with Slater driving in 2 and Gibson adding an RBI and 2 runs.  Ty Lutz had a 2 run double and Braiden Haines added 2 hits and scored twice.  Jacob Butts was 2-3 with a run scored.

In girls coach pitch, Bandy’s Pharmacy over Dairy Queen 13-5.  The players of the game for DQ were Kelley Cripps.  For Bandy’s were Samara Simmons and Venessa Dodson.