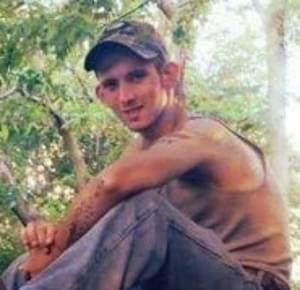 Dustin Lee Cassidy, 24, of Salem, passed away at 6:37 pm on Tuesday, September 24, 2019 in Salem. Dustin enjoyed the outdoors; camping, fishing and hunting, he liked making knives and trinkets, enjoyed spending time with his children and loved his family.

Visitation services honoring the life of Dustin will be conducted from 5 until 7:00pm on Friday, October 11, 2019 at the Triplett & Neal Funeral Home in Kinmundy. Memorial contributions may be designated to Triplett & Neal Funeral Home in Kinmundy to offset funeral expenses. You are invited to share your memories of Dustin and leave a condolence at www.triplettandneal.com.

In addition to his mother, he is survived by a son, Dyson Lee Cassidy and by a daughter, Alena Marie Cassidy both of Beckemeyer, seven brothers; Terry (Jane) Cassidy of Winter Haven, Florida, Troy (Erica) Cassidy of North Carolina, Rodney Cassidy of Salem, Charles Crain of Salem, Scott Crain of Salem, Daniel Crain of Salem and Johnathan Crain of Arizona, three sisters; Teresa (Jeff) Lerch of Indiana, Tracy Cassidy of Indiana and Carla Shivel of Kentucky, his grandmother, Pam Thompson of Vernon and by several nieces and nephews.

He was born on September 27, 1994 in Centralia the son of Sarah (Thompson) Cassidy and the late Carl Cassidy. Besides his father, he was preceded in death by a sister, Tammy Cassidy and by his grandparents, Winfield and Flora Cassidy and George and Betty Thompson.