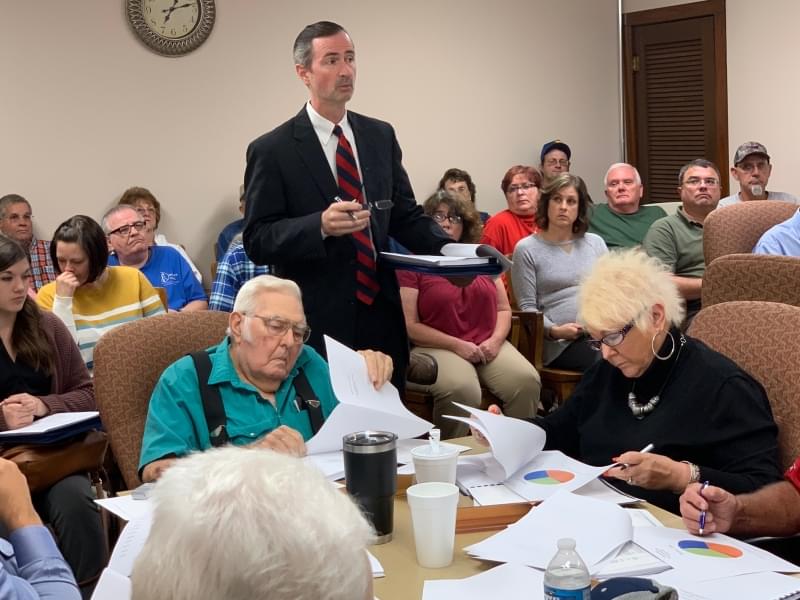 CPA Mark Vaughn delivers the annual audit report to the Marion County Board on Tuesday night.  Photo by Bruce Kropp.

The auditor Mark Vaughn brought the good news to the board which has largely been in the dark about its finances during the past year during a software conversion that did not go well.

Vaughn reported the county saw a $650,000 net increase in their financial condition.

“Well, I see you have $11-million in cash.  A lot of that you can’t use, it is restricted for other things. You have about $1.6-million in unrestricted fund balance.  That can go to pay salaries.  That can go to pay utility bills.  That goes to pay general operating expenses.  A lot of the funds are for restricted for other purposes, whether it be for the sheriff’s department or the highway department.  Something where you just can’t go and buy copy paper for the clerk’s office because it is restricted.”

Vaughn says the financial improvement would have been even greater if the county had received all 12 of its monthly payments from the state, but they were one short.   That resulted in a decline in state income tax receipts, but use and sales taxes were still up slightly indicating a good retail economy in the county.  Motor fuel tax revenue for county roads was flat.  Vaughn hopes the county will see one extra payment in the effected funds in next year’s audit.

Vaughn said expenses were up just $100,000 during the year.  He commended the county board on doing a great job of holding expenses down.

While the county’s balances are better this year, Vaughn says they are not back to where they were in 2016.

Vaughn believes the county’s financial data problems are now behind them as financial reports now being completed are current.

County Board Chair Debbie Smith was pleased with what she heard.

“We really didn’t know we were going to be in this good of shape and we are really, really pleased.  We don’t know the exact dollar amount, but it looks like we are really, really in the black.  That is good news especially with all the expenses we have incurred during this fiscal year with the building restoration, air conditioning units, furnace and all of that.  We are very pleased.”

Smith says they will now have better data to begin work on the county’s budget for the new fiscal year that begins December first.