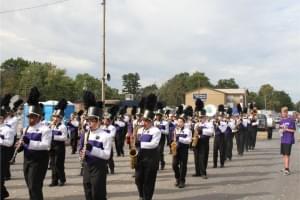 Two concerned band parents addressed their concern to the Centralia City Schools Board that the CJHS band equipment is becoming unusable.

Parent Amy Barnes passed around a list of what needs to be repaired or replaced as well as pictures of some of the instruments and uniforms that are in poor condition.  She explained that the band has grown this past year having 20 more students than last year and the department is running out of uniforms to fit all of the members as well as instruments for beginning band students.

Barnes said the band is expected to grow to over 100 students next year because of the very large number of students in beginning band that will be competing next school year.

Jessica Altonbaumer who is a parent that has been involved with the band said that the band should be given the same attention as sports.

Superintendent Craig Clark said he was unaware of all the band’s needs as it had not been brought to his attention.

School Board President Ron Johnson said on behalf of the board that they support the arts and believe the band should be seen as top-notch.

Clark explained that the schools had just received an arts grant of a quarter of a million dollars that is going toward things like chorus, drama, art, and band.

Clark plans to meet with band Director Mrs. McFall to discuss the list as well as take measures to improve the situation for the junior high band for the next school year.