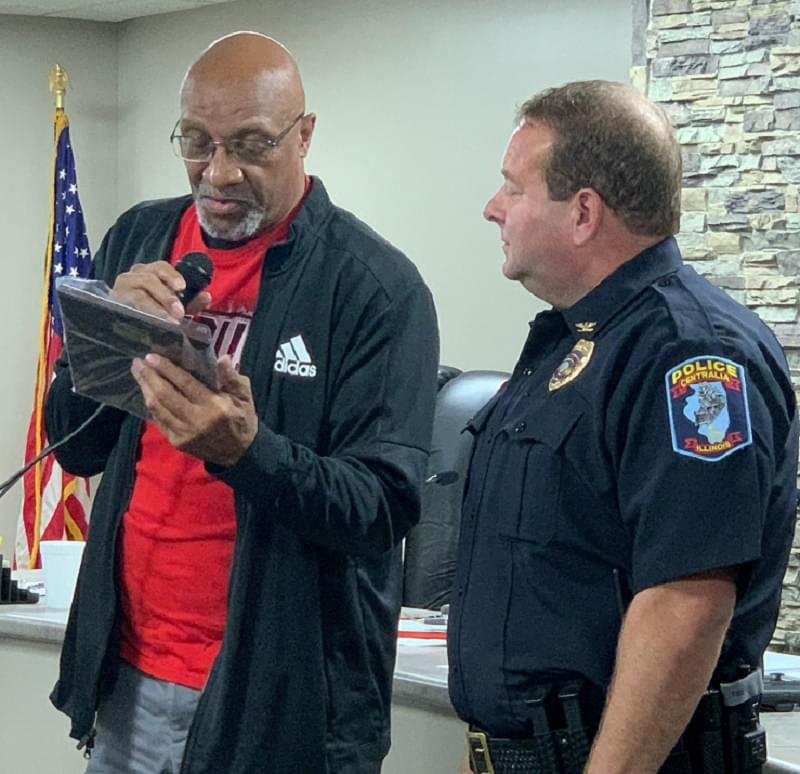 Centralia Police Chief Brian Atchison was honored by the Centralia City Council Tuesday night for 30 years of service to the police department, the last three as chief.

Atchison was praised for his work by Mayor Herb Williams, City Manager Dan Ramey and the council. He was presented a plaque of appreciation. Atchison feels one of his accomplishments has been building relationships with other law enforcement and city departments.

“We all work well together.  I think that’s what is making things work for us in improvements and I assure you there are things coming down the pipe that you are going to see this department has been working hard with other departments to continue to make this better.  I really want to conclude by saying when I took this job, and most people when applying for it, they say they want to help people and make a difference, and I think I’ve got a chance to do both.  Thanks.”

Atchison was flanked by several members of the police department as well as his family. While Atchison is retiring from the city, he will remain in law enforcement as an officer for the new Kaskaskia College Police Department. Atchison’s last day on the job is Friday. That is also the deadline for applications for the job.

One of the applicants, Ted Johnson, spoke during the public comment portion of the meeting and asked the city council to Censure Ramey for what he called unprofessional comments made in an e-mail to his reply about getting military credit. Johnson also asked that Ramey be removed from the decision making process in selecting a new chief because he would be prejudicial against Johnson. He then angrily left the meeting.

The city council took no action on the request, but Mayor Williams asked those speaking to the council to be respectful and mindful of how they talk to each other. He said those who aren’t will be asked to be removed from the meeting.