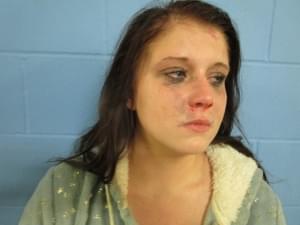 A 22-year-old Salem woman had bond set at $50,000 in Marion County Court Wednesday after being formally charged with domestic battery and aggravated battery to a correctional officer following separate incidents Tuesday night.

Salem Police initially took Brittnay Finley of East Olive to jail for domestic battery after she allegedly struck her boyfriend in the face.

Once she was at the Marion County Jail, Finley allegedly became involved in an altercation with a correctional officer attempting to book her into the jail.  She is accused of kicking the officer in the leg, them coming at her with her hands out, striking the officer’s hands and grabbing her wrist.

The correctional officer received minor injuries but did not require medical treatment.

As a result of the incident, a charge of aggravated battery to a police officer was added.

Finley had the public defender appointed to represent her.  If released on bond, she was ordered to have no contact with the victim of the domestic battery, abstain from alcohol and drugs and be subject to random testing.