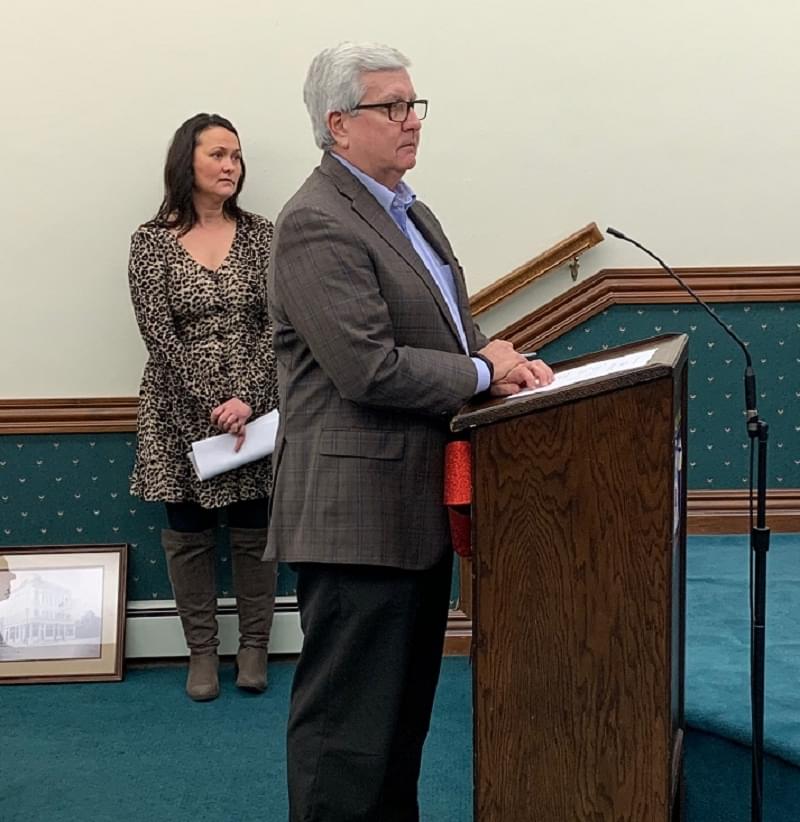 The Salem City Council gets an update on Mission Salem from Brian Gansauer (at podium) and Angie Courtright at Monday’s meeting  Photo by Bruce Kropp.

The Mission Salem organization has completed or approved 23 projects so far in 2019.

The person heading the group, Angie Courtright, says they continue to operate under the Greater Salem Area Foundation with 10 churches plus several other volunteering to complete the work.

“Eight of those have been wheelchair ramps, five roof repairs, three door/window projects, one foundation repair, one painting, and five other miscellaneous projects.  And the applications continue to come in on nearly a weekly basis.”

Courtright is especially proud of how they have been able to help those in need of wheelchair ramps. She pointed to one example where a resident missed two dialysis appointments before Mission Salem stepped in.

“She used a wheelchair and South Central Transit to get to her dialysis appointment and they will help her in the van but the patient has to make it to the road for that to happen.  Her house is literally 10 feet off the road and the ramp she had collapsed so 10 feet was separating her from life-saving treatment.”

Courtright says they provided a $2,000 scholarship to a Salem High School student going into the construction industry that included a commitment to community service.

2020 goals include raising financial support, finding storage space, locating their own tools and trailer, and adding a PR Specialist and Resource Coordinator to their leadership team.

Courtright says they have been partnering with other agencies and programs including USDA Rural Development, BCMW, Modern Woodmen, Keep Salem Beautiful, CVMA Chapter 245, the Odd Fellows and many more. She adds many Salem businesses have stepped up to support their efforts through discounts, donations and or monthly financial support.

The Salem City Council appeared receptive to continuing their support. City Manager Rex Barbee says the city is blessed to have the organization. Members of the city council concurred.