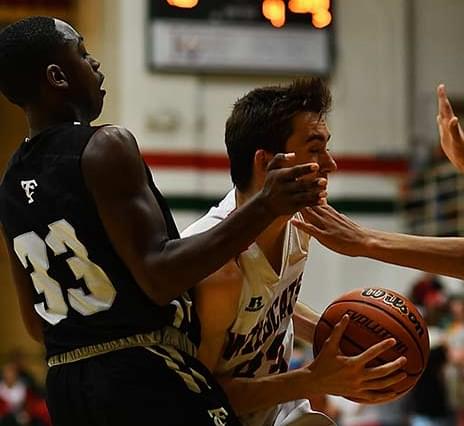 The 69th Salem Invitational Tournament opened up last night and in the nightcap the Carbondale Terriers improved to 15-5 with their 46-30 win over the host Salem Wildcats.  Tavaris Macklin had 18 to lead Carbondale and his twin brother Davaris Macklin finished with 13.  Salem was led by Laten Wayer with 11, Luke Light finished with 6.

At halftime of the Salem/Carbondale the Salem 5th Grade Bobcats basketball team was honored for qualifying for the Middle School Basketball Association State Tournament in Rockford March 13-15.  The Bobcats are coached by Toby Gullion & Shane Tennyson and are 21-9 on the season.

East St Louis opened up the tournament with an impressive 73-33 win over Highland.  The Flyers jumped out to a 30-0 lead after the opening quarter and led 50-8 at half and 62-22 after three quarters.  Lashawn Johnson had all 11 of his points in the first quarter, Stephen Alexander had 9 points including an emphatic 1st half dunk to get the crowd buzzing.  The Flyers will get Carbondale in a premier matchup Friday night at 6:30.  Highland falls to the consolation semifinals at 11:30 on Saturday morning when they play the Wildcats.

The Tournament continues tonight with the other 2 first round games starting at 6:30 with Effingham and Mt Vernon followed at 8pm with Teutopolis and TF North.  Both games can be heard on WJBD and streaming at WJBDradio.com.

The MTC Semifinals are tonight at Wayne City with Woodlawn and Waltonville at 6pm followed by Wayne City and Odin at 7:30.

At the Nashville Tournament it was Mater Dei over Metro East Lutheran 73-33, Nashville beat Brentwood, Missouri 57-39.

The Litchfield Tournament continues tonight with 5th and 9th place bracket semifinals.  In the 5th place bracket at Simmons Gym its Greenville and Gateway Legacy followed by Civic Memorial and Hillsboro while at the same times at Panther Gym in the 9th place bracket, Mt Zion takes on Father McGivney and Ramsey plays Litchfield.

Tonight is the consolation semifinals at the Superman Classic at Massac County with Graves County, Kentucky and Vienna followed by Cobden and Century.