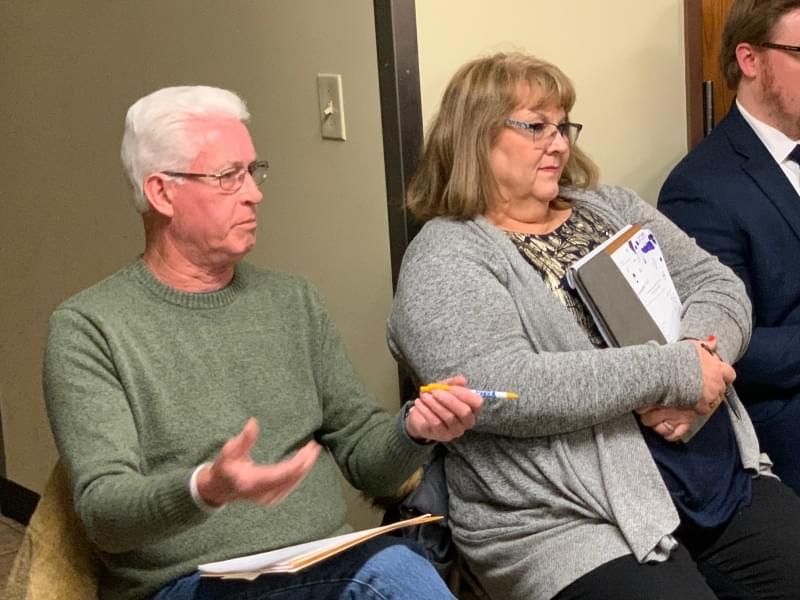 Roger and Pam McKay explain their cannabis dispensary and grow facility to the Wamac Zoning Board Monday night.  Photo by Bruce Kropp.

The Wamac Zoning Board has approved a special use permit for a cannabis dispensary and grow facility on a 5-0 vote. The proposal presented by Roger and Pam McKay for the former McKay’s hazmat building at 1775 South Brookside will now go before the Wamac Board of Alderman at its March 2nd meeting.

More than two dozen people crowded into the Wamac City Hall Monday night for the hearing. Only two spoke against the proposal, including Pastor Don Smith, the minister of the New Testament Baptist Church located just 200 feet away.

“The right is never accomplished by doing wrong.  It is probably true this community would receive financial benefits that perhaps Mark and Dave will receive help with keeping up with our roads and many other responsibilities that they have.  Perhaps Police Chief Prather and those serving with him will gain more trained officers to assist them, but it is never right to do wrong to accomplish what seems to be right.”

Most of the rest of the audience members either voiced their support in favor because of the monetary and job benefits or were just there to listen.

There was no opposition from city officials. City Clerk Marian Suhl, speaking as an individual, sees many benefits.

“The benefit off of the tax would be very helpful.  We could get some much-needed things for the city that we really have not been able to afford honestly.  We do the best we can, and I believe the Police Department is the best they’ve ever been and I think they can handle whatever happens.”

Police Chief Steve Prather said no one knows what the traffic will be, but feels they can handle whatever happens. Zoning Administrator Jeremy Howell, who is also a police officer, concurred.

McKay says they would provide their own security and if limited parking becomes an issue they could initially bus people from the Fairview Shopping Center. They do have four acres of adjacent land that could eventually be developed for parking.

“Why is my location better than other locations in this town?  I think its probably one of the best locations for this type of activity.  It would be so much better if the church wasn’t across the street from us but as good neighbors we would look to accommodate and worth with the church in any way we could.”

McKay says they would not sell before Sunday morning services were over and close early before Wednesday night services. He says they would also provide a drug and cannabis abuse program to North Wamac Grade School students in 6th through 8th grade.

McKay says they already have seven employees as they wait to see if they get state approval. If approved, he anticipates 20 to 25 employees apiece at both the dispensary and grow facility. McKay promises they will be high paying jobs with benefits.