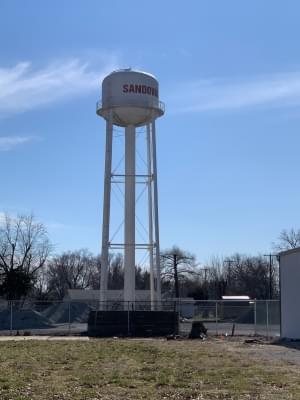 The Sandoval Village Board was told borings were taken last week as the first stage of the project to replace the non-functioning water tower with a new one. Public Works Director Phil Milano is hoping the actual replacement project will begin by late summer. The new tower, which will go up in the same place as the existing tower at Pine and Wyoming, will be larger. The village has received a $500,000 state grant and will be seeking an EPA loan to fund much of the rest of the $900,000 plus project.

Milano reports demolition of the bleachers, bathrooms, and concession stand at the Sandoval Village Park is underway to make room for a nearly $400,000 overhaul of park facilities. Work on the installation of the new ballfield equipment and ADA assessable bathrooms is expected to begin in the spring. A committee meeting will be held next Monday with some of the potential suppliers of equipment for the new park. Sandoval received a $344,000 grant to pay for much of the work.

The board approved spending $3,642 for the summer mosquito spraying and larvacide program that will be conducted by the public works department.