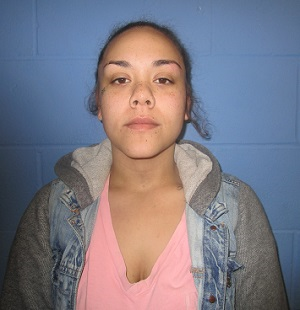 A 21-year-old homeless Centralia woman has been arrested by Centralia Police on multiple charges.

No details have been released on the new drug and stolen property charges.

The warrant apparently was issued in connection with an arrest of Kaufman earlier in February by Centralia Police on three counts of unlawful delivery of meth.   The arrest was made the same night a man was allegedly robbed and pistol-whipped as he was reportedly taking heroin to a home where Kaufman was staying at 520 1/2 Locust Street.   The victim, 29-year-old Bradley Hilderband of Romeoville, was not able to pick out the person responsible for the armed robbery from a lineup and no arrest has yet been made.

Centralia Police Chief Greg Dodson said at the time the three-drug buys had been made earlier as they were preparing for a raid on the home but made the arrest early when the armed robbery occurred.   However, the State’s Attorney’s office later released Kaufman without being charged for further investigation of the case.

Centralia Code Enforcement found the home uninhabitable due to flagrant code violations and the home was boarded and condemned.