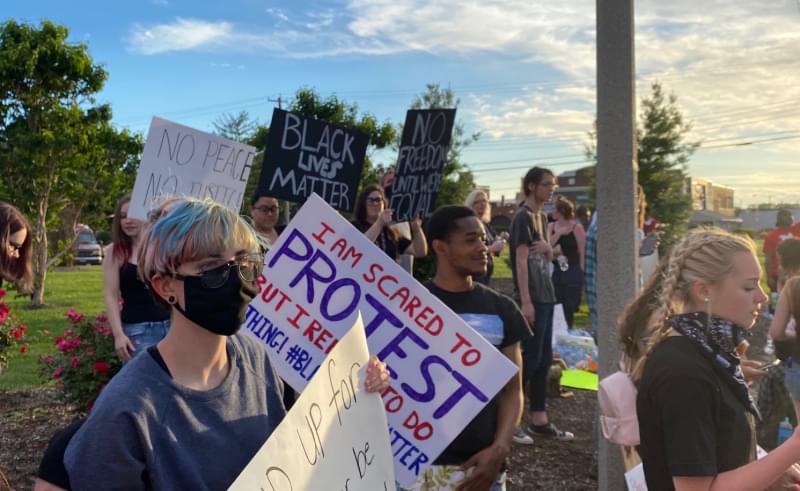 About 75 people from all walks of life gathered together under the Bell Tower Saturday night for a peaceful protest in the aftermath of the death of George Floyd in Minneapolis during an encounter with police.

Chanting in unison words of frustration the protesters stood with signs expressing their anger against police brutality and racism across America.  In a place where normally one might hear the chimes of bells, chants like “This is what Democracy looks like” and “Black Lives Matter” rang out across the park.

Oslo C. White, who started the protest, felt a protest was necessary to unite everyone in the face of these tragedies for the black community.  “Racism, that’s a big problem in America.  I’m just trying to make a way for all of us to come together as one.  We need Unity.”

Protester Quontavier Nicholson says that this protest is the beginning of a new era of unity and action.  “I love us. I will fight for us. There is an us. There is no such thing as ‘there’s not a black and white’ but when you mix them together you become something. This is the grey area. You are now looking at the grey area. Be prepared.”

When asked about the riots in Minneapolis, Nicholson says a peaceful protest works in small towns but in bigger cities, it acts as a ‘warning shot’ if something doesn’t happen.

A big theme of the protest was that sometimes not saying anything can actually say something.  Protestor Mark Hamilton Jr explains,  “Sometimes saying nothing is saying something and if you are saying nothing you’re just as bad as the problem. If you don’t have any sympathy or compassion about what’s going with what people are trying to do, be quiet, but we see you and the way we are going to attack this the smart way is through their pockets.”

Protestor Mia Goodiel led the group in a number of chants with words like “Black Lives Matter’ and “This is what a family looks like.  At one point during the protest, she read the names of individuals across America who were victims of racially charged violence or police brutality.

Some cars honked their horns in support of the protest while others took further action.  One caucasian man in a passing car got out of his vehicle at the stoplight and laid down in the road saying “I am with you” to the protesters.  But not all of those passing by were supportive. Some cars drove by the protestors with their windows down trying to start arguments and yelling at the protestors.  Others drove by in silence looking straight ahead as if it wasn’t happening.

Protestor Zachary Whalen says now is the time to fight for equality, for everyone. “Continuous mistreatment of minorities in the United States has gone on for way too long and it’s finally time that we fight for the equality of everyone.  We’ve had several different moments in history where we’ve rioted for different rights for specific groups but now we are all fighting to be treated as one.  I [as a white man] shouldn’t be getting away with something that another innocent black man is being killed because of something they are suspected of. To me, that’s enough to set off a whole nation.”

One protester, Taylor Baur shares her story with the protestors the moment she knew she had to speak out. “Two of my siblings are black and My brother being six foot tall. When he said that he was afraid to be a black man, I’ve never felt my sisterly anger and my need to protect anyone more [than that moment] and I also feel so powerless to do so.  It took me quite a few days to talk because I do get very emotional about it but I decided it was more important to be here than to not [be here].”

While the protest did remain peaceful and the majority of protestors looked down on more violent speech, a few protesters shared bolder statements.  Shawn Wilks sign originally said “‘Kill them with kindness” which is scratched out and replaced with “kill them with the same brand of gun that they kill us with.”

Laray Billberry was one of the others who had a more humble message to share.  “It’s good that we are coming together.  Like I said we are a framework and you know we have to take action to make our dreams come true.  I just wanna send a message out there that if our hearts die, our spirits survive. You know?  No matter if we die something hits the fan or anything I want our message to stand that black lives matter, all lives matter too, but these young black men dying their lives matter too.”

The event ended with protesters marching together for a few blocks and a number of people coming outside of their houses to join in.    While police were in the area, they never came into contact with the protestors.