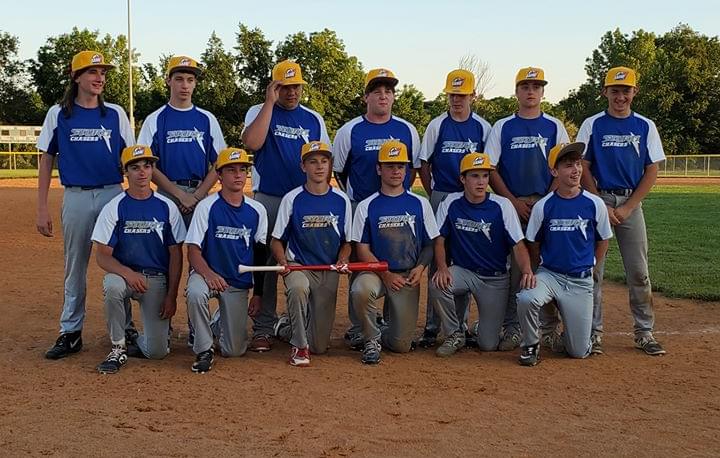 The SC 15u Storm Chasers finished 2nd at a tournament in O’Fallon, Missouri over the weekend.

The championship was a heartbreaker for the Storm Chasers as they lost the lead late to fall 7-5 to the SI Bucs.  The game was tied at five in the bottom of the fifth when the Bucs plated a run on an error.  SC got things going in the first when Beau Jolliff doubled on a 1-1 count, scoring two runs.  The Bucs tied the game up at five in the bottom of the third inning on a 2-run single.  Aidan Dodson took the loss for SC allowing just 3 hits and 2 runs over 3 innings while striking out 7.  Jolliff allowed five hits and five runs over 2 innings in the start.  Chase Thompson, Anthony Buonaura, Spencer Johannes and Jolliff each collected a hit.  Logan Fleener stole a couple bases.  Jolliff drove in two with a double, Buonaura drove in a run and Johannes tripled.

SC took the lead late and beat the Tigers on Sunday.  The game was tied at four in the bottom of the third when an error scored a run for the Storm Chaers.  Ethan Dunn drew a walk scoring a run in the first.  Ethan Watwood earned the win allowing 0 hits and a run over 2 innings with 3 strikeouts.  Spencer Johannes started the game allowing 3 runs on 3 hits over 2 innings.  Brandt Hiestand drove in 2 runs on 2 hits, Kason Sullens added an RBI along with Dunn and Matt Morriss.  Logan Fleener and Morris doubled.

Chase Thompson doubled in the first to score the first run of the game as SC added 3 more in the opening inning on their way to the win.  Noah Kee earned the win allowing 1 run in 1.1 innings and 2 hits with a strikeout.  Ethan Dunn threw 3.2 of relief and recorded the last 11 outs to earn the save.  Fleener added an RBI with a double.  Thompson doubled and drove in the other run.

Five SC pitchers didn’t allow a single hit as they opened tournament play with a win.  Dodson, Fleener, Dunn, Morris and Watwood combined for the no-hitter.  SC scored 3 runs in the opening inning fueled by a Jolliff 2-run double.  Dodson earned the win.  At the plate, Dunn also drove in a pair of runs as he doubled.