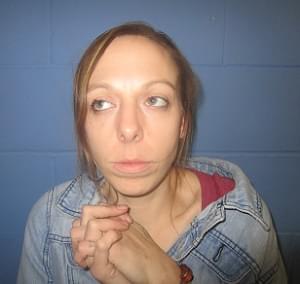 A 34-year-old Odin woman has been formally charged in Marion County Court with three counts of burglary. Laura Spitler of O’Fallon Street was arrested over the weekend by Odin Police on four vehicle burglaries in Odin.

Spitler is charged with entering two vehicles on North Merritt Street and one on North DePew on July 29th.

Odin Police Chief Joe Nix says in one of the burglaries, she is accused of stealing a large amount of clothing. Some bags of clothing were left in the neighborhood and one of them contained Spitler’s wallet that somehow got mixed in the clothing.

Police were later alerted when Spitler was trying on some clothing in the Casey’s General Store that also turned out to have been stolen from the vehicle.

Spitler is also wanted by Salem and Patoka Police. Salem Police have filed reports listing Spitler as a suspect in a vehicle burglary on Woods Lane next to the Salem Super Eight. She is accused of
entering a car after leaving the motel office where she filled out an application giving her name and other information.

Spitler had bond set at $3,000 during her first appearance in court. She was ordered abstain from alcohol and drugs. The public defender was appointed to represent her.