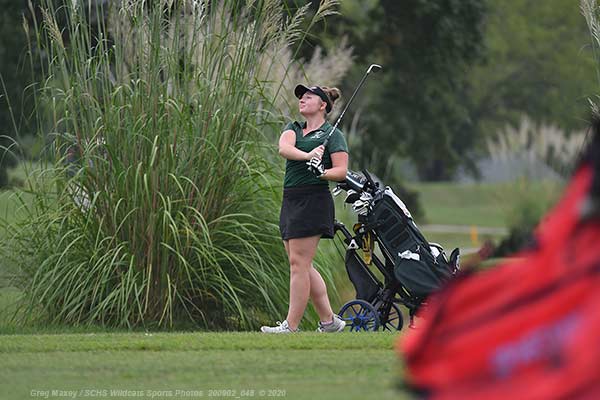 The Salem Lady Wildcats golf team remains undefeated (5-0) after its match-up on the back nine of the Salem Country Club Thursday afternoon against the West Frankfort Lady Redbirds. The final score was 202-215. The Lady Wildcats win was led by Kenzie Anderson who fired a 44 for low medalist honors. Lauren Ice posted a round of 50, Alyssa Paul scored a 52, and both Laine Stinnett and Haley Duncan posted 56’s. Mak Mann also played and posted a 60 for Salem.

This Saturday the Wildcats boys and girls golf teams will host the annual match play competition at the Salem Country Club and the Lady Cats will travel to Red Bud, Il for their conference championship on Monday.

At Greenville Country Club in a tri-match, Greenville shot 183, Nashville 188 and Christ Our Rock 189.  Medalist honors went to the Stallions Parker Boehne who shot a 42.  Matthew Slover added 44, Martin Jett 49 and Ajay Quick 54.  Parker Renken led Nashville with a 43.  Christian Bauer shot 44 to lead the Comets.