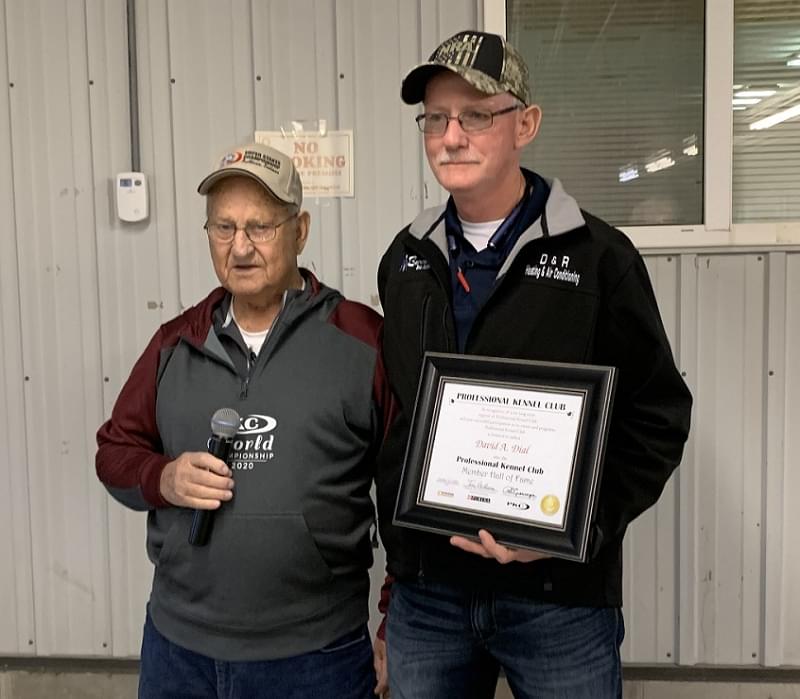 David Dial (Right) receives his Hall of Fame plaque at this weekend’s PKC World Hunt headquartered at the Marion County Fairgrounds in Salem.

A Morgantown, Kentucky man has won the first place $30,000 prize in this year’s PKC World Hunt centered at the Marion County Fair Grounds in Salem.

Zack Burden won the final hunt to claim the prize early Sunday morning with his dog ‘Legs’.   The win increases the dog’s lifetime winnings to $39,319.

The North Carolina State President and Chairman of the Executive Board Tom Wilson says it was a record year for the World Hunt, with 1,596 entries from across much of the country.

“We thought the virus would kind of cripple us a little bit, but I reckon everybody’s been inside, so they’re wanting to get out, so we had a crowd,” said Wilson.

On Friday afternoon, one of those who helped bring the first Raccoon Hunt to Salem was honored by becoming a member of the organization’s Hall of Fame.   David Dial of Salem has been involved in Raccoon Hunting for over 50 years.

“The Hall of Fame is people had something to do with helping the organization and PKC over the years. You have to meet a certain age requirement, which is 60 or above, and then there are other requirements that are involved in it. We usually select anywhere from 3 to 5 people a year to be inducted into the Hall of Fame,” Dial said.

Dial is not surprised the original Superstakes brought to Salem was followed by the Youth and World Hunt and now a fourth hunt in the Spring.

“Time flies by. We knew we’d probably be here a while. The city’s pretty open-arms to raccoon hunters, and raccoon hunters like coming up here. They enjoy it,” Dial said.

The second-place prize winner of $17,000 was a dog handled by Judas Bowling of Madison, Indiana and owned by Chris Hatfield of Cromwell, Kentucky.   The $12,000 third-place prize went to GCH Wipeout Slim Owned and handled by John Ryan Hisrich of Surgarcreek, Ohio.

The events fill most of the motel rooms in Salem as well as bring a lot of business to the restaurants and businesses that have pet supplies.