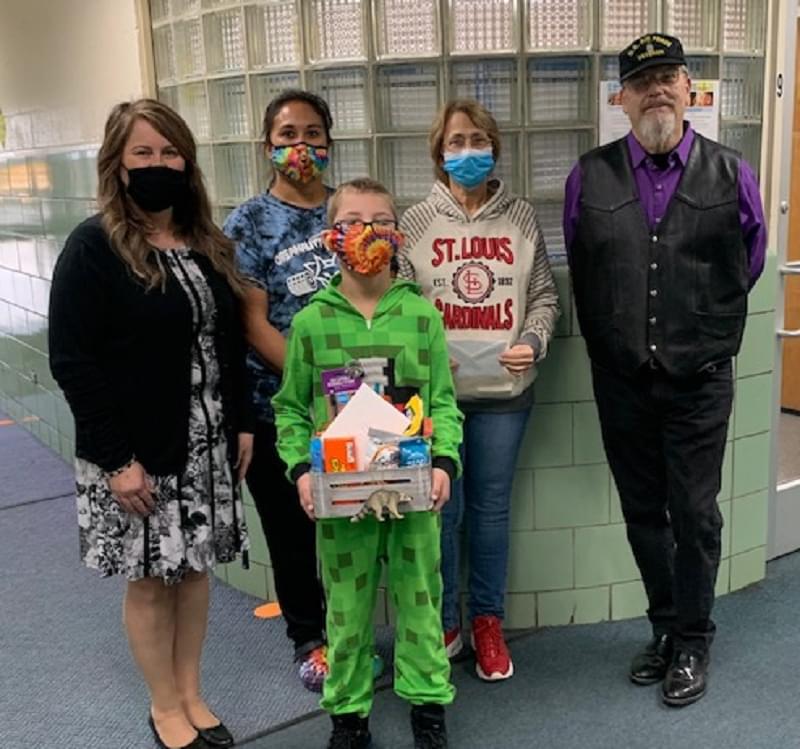 The Raccoon Grade School on Thursday honored fifth-grade student Keith Harris and others involved in rescuing Gary and Kathy Benjamin from their burning home at 2581 Selmaville Road in rural Salem earlier this month.

Superintendent Misty Johannes made a presentation to Harris for his alertness that put the rescue into motion.

“We want to honor 5th-grade student Keith Harris for being very observant and alerting the adults on the bus that he saw smoke coming from the Benjamin house.  With his quick action he helped send immediate aid to the Benjamin’s.”

“So I saw smoke coming out of the house and I knew something had to be wrong with it.”

“Keith was calling my name and I asked him what was the matter.  He said he saw smoke, but with the trees I couldn’t see it and neither could Valerie who rides with us to take temperatures, and then we saw the smoke and grandpa Marshall was there walking across the street after dropping off his granddaughter.  Then we saw a big burst of orange flame in one of the windows,” said Douthart.    “I wasn’t aware it was a garage I just opened the window and shouted for grandpa…fire, fire, your neighbor’s house is on fire, so he reached for his cell phone and ran.”

Bus aide Valerie Sherman also worked to alert Douthart and Marshall Helm that the Benjamin’s home was on fire. After calling 911 on his cell phone, Marshall said he made his way into the Benjamin home.

“The garage door was unlocked so I opened that so the next door to the left was unlocked and I went in there yelling fire, fire, fire…we have to get out of here,” Helm explained.  “And Gary came on out and he was a little disorientated and it took a little while before his wife came out.”

Helm said both already had some smoke inhalation but was able to get out of the house on their own power. He notes they had to use a back door as the garage door was now fully engulfed in flames by the fast-moving fire. Helm said the fire began around a heat lamp and was spreading up a wall when he first entered the home to get the Benjamin’s out.

Douthart says some fate was also involved as she was running late that day as a result of a previous stop where the students had to go back inside their home to try and find their masks.

Salem Firemen were able to contain the October 21st fire to just one room of the home, but there was heavy smoke damage throughout. The garage was a total loss.