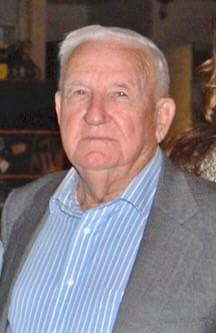 Donald Dean Edmison, 96, of Opdyke, Illinois, passed away at 10:45 am February 19, 2021. He was the youngest child of Thomas and Stella (Wood) Edmison. Don was a Navy WWII Veteran.

A Private Family Service will be held. Memorials may be made in Don’s memory to Shriner’s Hospital for Children or the Jefferson County Meals-on-Wheels and will be accepted at the funeral home or mailed to Hughey Funeral Home, P.O. Box 721, Mount Vernon, Illinois 62864.Call Hughey Funeral Home at 618-242-3348 or visit hugheyfh.com for further information.

Don was born August 10, 1924 in Keenes, Illinois. He married Deloris (McKitrick) Edmison on December 14, 1944 in Wayne County, Illinois. They were blessed with 70 years of marriage before she preceded him in death on September 6, 2015. Don and Deloris were long time farmers of Jefferson County, Illinois. In addition to his parents and wife, Don was preceded in death by his son, Darrel Edmison. He was also preceded in death by twelve brothers and sisters and several nieces and nephews.