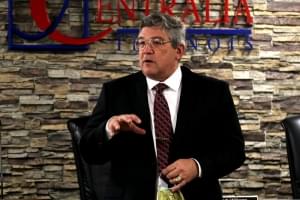 Centralia City Manager Lowell Crow has announced that he will be retiring effective March 8th after the city council meeting.

Mayor Herb Williams confirms Crow has submitted a conditional letter of retirement.    In the letter, Crow stated ‘that after 34 years of service in the Navy and now seven years of service in City Management, my wife and I believe now is the time to make this change for health and personal reasons.   Taking that in mind, my wife and I have made the difficult decision to step away from City Management and retire for the second time.’

Crow’s letter continues ‘this was a tough decision, but I felt the timing is right.  I have learned a lot over the last seven-plus years and feel that I have made an impact not only in the communities I have served but in the City Management profession’.    Crow also said he did not make this decision lightly and without deep reflection.

The news release from the Mayor also says Crow additionally thanks the City of Centralia, its elected officials, staff, and members of the public for the support he received as manager.

Williams in turn is thanking Crow for coming into the office of City Manager during the Pandemic.   Williams notes this is a difficult time to relocate family to a new city and a new position.   Williams says the city wishes Lowell nothing but the best in the future and know he has earned the right to move away from public life and enjoy retirement.

Crow told WJBD/WSIQ News he plans to remain in Centralia during his retirement.

After a career in the military, Crow served as city manager of Monmouth for three years and then Freeport for another three years.   During his tenure at Freeport, he was selected by his peers as City Manager of the Year.    Crow arrived to begin work in Centralia last May.

Williams earlier denied Crow’s job was in jeopardy as the city council held several closed sessions where the Mayor said he was trying to pull everyone together in the same direction.