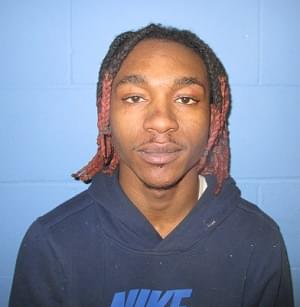 A 21-year-old Columbus, Ohio man who remains in custody after fleeing a traffic stop on I-57 in January setting off a manhunt now faces two additional counts of aggravated battery.

Princeton Glenn is charged with striking a correctional officer in the face and chest in separate counts from the same February 28th incident.   His bond was increased to $50,000 and the public defender appointed to represent him.

Glenn was originally arrested for unlawful use of a weapon by a felon and obstructing justice when he was involved in an altercation with a State Trooper.   He reportedly had a gun in his possession when the traffic stop occurred, but it apparently had been dropped before he ran on foot.

Police investigated several reports on Glenn’s location that night, but he wasn’t located until the next morning when he was found walking south of Salem on Route 37 by a deputy heading to another call.  He was taken into custody without incident.

Glenn is also being held on a probation violation in an Ohio burglary case.