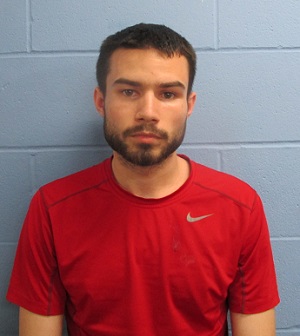 A 21-year-old Salem man was arrested at his home on Tuesday after a vehicle allegedly stolen in Fayette County was found sitting outside.

He was allegedly found with two types of narcotic pills in his possession leading to the controlled substance charge.  Fairchild also allegedly had a glass pipe used for drug ingestion.

Sheriff’s deputies say the vehicle Fairchild allegedly stole was also identified as being involved in a ‘road rage’ incident on Hoots Chapel Road on Tuesday after it almost ran a truck pulling an anhydrous ammonia tank off the road.