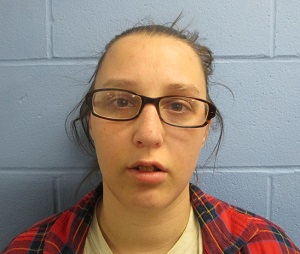 A 24-year-old Sandoval woman has been sentenced to six years in prison after her sex offender probation was revoked on two convictions.

Dallas Holt received the six-year prison term in both cases and will serve the time concurrently.   She will have to complete two years parole when getting out of prison.

Holt was initially placed on four years probation for two counts of aggravated criminal sexual abuse for committing sexual acts with two younger family members.    She later pleaded guilty to violation of the sex offender registration act for not registering and for having contact with a person under the age of 18.  Holt received 30 months probation on that conviction.

Holt was charged with the initial sex offenses in connection with her parents Gary and Patricia Speagle who both received 110 years in prison on multiple predatory criminal sexual assault charges.   Gary Speagle also pleaded guilty to two counts of child pornography.  The three were arrested in October 2016 after a technician reported finding child pornography on a computer he was repairing for Gary Speagle.

Holt admitted to the portion of the petition to revoke probation for not abstaining from drugs and alcohol and testing positive for a chemical in marijuana.

In the contested sentencing hearing in Marion County Court on Tuesday, Holt made a statement in allocution to the judge before the sentence was handed down.  She apologized for her actions and noted she was still dealing with the trauma from her past sexual abuse.

Sheriff’s Deputy Kevin Cripps testified about a new offense of failure to register as a sex offender.   Probation officer Andrea Davis told the court about probation violations including drug use.  Sheriff’s Investigator Anthony Decker testified to the circumstances of the underlying sex offense.